My first experience as a volunteer, although it was just to photograph the Real Beni community and just a bit of hands-on help, it was by far the most significant experience in terms of culture contact of my trip in South America. My idea of volunteering was different but as I’m passionate about photography I couldn’t say no to this opportunity.

The first thing we did when we arrived at Real Beni was to meet doña Cupertina, our host, the grandmother of almost all the young people from this small community and the mother of Baldemar, the guy who brought us there. We went to find a place to camp, we cleaned the area of branches and leaves, we set our tent and went up the hill, where she had an improvised place to cook, to eat lunch. We cooked food on the fire, fed corn to the chickens and after lunch Baldemar took the boat and went back to Rurrenabaque, where he is running a travel agency, BOA.

So there we were, me and Katerina, curious and a bit overwhelmed. Katerina found this opportunity for us to volunteer while she was searching for a place to paint. She’s an Argentinian art graduate traveling and painting in exchange for board and food and sometimes money. I met her at the hostel in Rurreanabaque and as I was telling her I want to do some volunteering and to have more authentic experiences, and as she saw I’m passionate about photography she thought this opportunity will suit me just fine. Baldemar had this idea of creating a different tour in the jungle, one in the community where he was born, where tourists would meet the people, with their traditions and beliefs, with their customs, their music and eat their traditional food. As this isn’t an isolated community and people go regularly to Rurrenabaque to sell fruits and vegetables this idea seems helpful for them and could be a good cultural exchange. Our part in this was to spend five days with the kids, speak with them about recycling and good practices, and photograph them so that Baldemar can make a presentation of the community back at his travel agency where he had some other volunteers working on a website for him.

From the beginning, I was amazed how kind and open doña Cupertina was, always smiling and always calm. She brought us cocoa pods and we ate the skin of the beans and put the beans to dry to be made powder for the cocoa drink. It was the first time I saw cocoa in the natural form, not in a box already processed, so I was really excited. Next days I experienced the same excitement with the sugar cane we chewed, the pineapples I saw in every stage of growth, the yucca roots which I learned to peel and clean and I wanted to eat each and every lunch.

Later that day we met some of the kids from the community, first timidly but after we spoke a bit with each other they became very open. We watched the sunset together and they showed us their dog Colita. Those days in the jungle there were mostly about them, about the kids.

First night in the jungle we went to sleep early, mosquitos already were feasting from our blood so we searched relief in the tent. But we couldn’t sleep right away as we heard music from the other community across the river. Next day doña Cupertina told us there is a three-day celebration of a catholic saint across the river, where people pay respects and offer gifts at the feet of the saint statue and then spend the evening dancing. One of the things that amazed me in Bolivia was the strength of the catholic belief of the people combined with their old belief in Pachamama.

At evening, soaked in mosquito repellent, we went with our host to the river and sat there under the clearest sky, with faint music and jungle noises in the background. Doña Cupertina sang two songs for us while smoking a cigarette and told us she likes to sing and dance. One of the songs was about a girl from the jungle falling in love with a boy her parents disagreed with. She has to make a choice and although she loves and respects very much her parents she decides to go deep in the jungle with her lover. Years are passing by but the girl is always thinking about her parents and yearns to see them again. I recorded her and next day when I met one of her sons I asked him to listen. He was impressed, had tears in his eyes when he listened and he sang the same song using his flute. As doña Cupertina is the oldest person in the community I imagined the song might be about her, although I didn’t dare to ask.

Later that evening one of our host’s nephews came to the river to take a boat to cross it to the other side. All three of us went with him and I got a taste of a dancing evening in the community. Doña Cupertina was shining and everybody wanted to speak and dance with her. It was a very joyous evening.

First thing in the morning we woke up hearing the ducks picking at our tent and making noises. When we were getting out from the tent the kids were already somewhere around. Every morning we were trying to wake up earlier than them but with little success. We were eating breakfast together although for them was already the second one and the rest of the day was spend together, going to swim in the river, fishing with worms, playing football, playing with their monkey pet. A big part of the beach was planted with beanstalks because sand is a good place to plant them and it was always an adventure to make sure the ball won’t hit and break them. They showed us the school and brought a world globe and I pointed to where I’m coming from and where I’ve been before coming to the jungle.

Because this isn’t an isolated community usually when the kids are of highschool age they are going to one of the cities at school, live with a relative there or at a dorm. Until then they have a teacher coming at the community Mondays and leaving Fridays. The kids are separated in two intervals of age thus forming two classes. I asked them what they want to do when they will become adults, not many saw themselves still in the community, some wanted to be teachers or doctors. These types of communities will start to disappear across the world, and with them also their traditions. It’s hard to find a balance, pursuing a good education, a more safe and comfortable life but going back to your family community where your life experience might not mean that much anymore, developing a community but keeping traditions intact.

Some afternoons, when resting after lunch and staying in the shade to hide from the sun, our host was showing us how to make artisanal fans from palm leaves to use when it’s too hot, the type she used to blow the wind on the fire when she was cooking. Each day there were 2-3 tourists coming to make sugar cane jus using a wooden tool she had there. She was bringing the sugar cane plants, then showing them how to use it and helping them. In exchange, she got a small sum of money. After tourists were leaving the jus left was ours to share with the kids. Saturday was quiet as all of the kids were helping their family to pick food and prepare to sell it in Rurrenabaque on Sunday: rice, coconuts, bananas, cocoa, sugar canes, beans, yucca were some of the cereals, fruits and vegetables they sold at the Sunday market. Although they were excited to spend time with me and Katerina the kids had also responsibilities and were serious about them. By the time we were waking up Brenda already cooked for her brothers the fish she took from the net she had set the night before and Mireja was taking care of her younger brother. Life in the jungle is hard but nobody was complaining. Sometimes at night they were starting the electricity generator to watch a movie from the DVD player. One night they watched Titanic, for the tenth time, they said, and I could hear laughter and giggles from the room the entire family used as a dormitory. Outside, the adults were playing instruments singing songs they passed from generation to generation orally. We made a payment to Pachamama that night, Baldemar brother dug with a machete a small hole in the ground where we put coca leaves, alcohol, and cigarettes, all the good stuff. Seems like Pachamama likes all the vices. 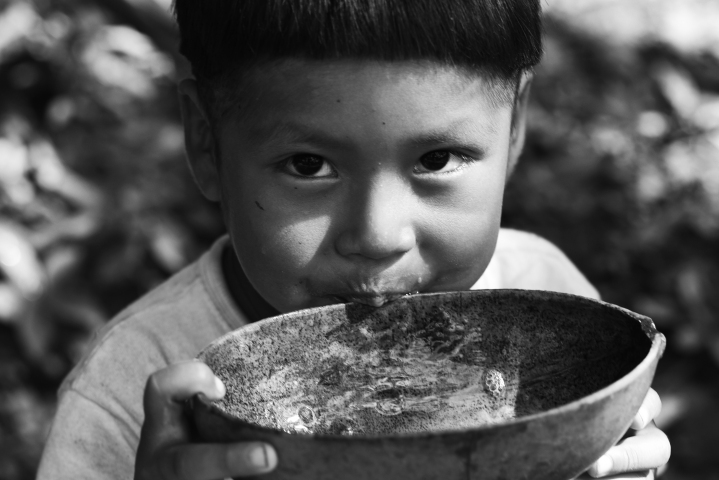 Saying goodbye was hard, we really had a great time there, and although mosquitos were cruel we enjoyed every moment of those days.

I'm a passionate photographer and traveler. I set foot on all 7 continents, I got amazed in Antarctica, I volunteered in the bolivian amazonian jungle, I jumped the highest bungee from a bridge in South Africa, I made some of my best photographs in South East Asia, I trekked in New Zealand, I wondered in Japan, I walked 1700km in Portugal and Spain, I lived two months under the northern lights on an island north of Norway.